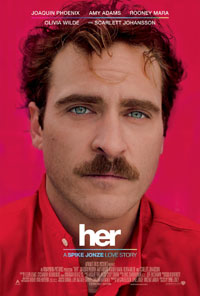 Set in the near future, Her is one of those lovely movies whose premise can be summed up in a short sentence (“Man falls in love with operating system”) and yet remain compelling throughout the entire run time.

The man in question is Theodore Twombly (Joaquin Phoenix), a writer at a place called BeautifulHandwrittenLetters.com (and if you are wondering if it might be thematically significant that Theo is employed as a writer, communicating for other people and not himself, you would be correct). Technology has evolved just the right amount- the devices that people use in Her are not exactly the same as what we use today, but they make sense to anyone who has a smartphone or a bluetooth headset. You pop the little earbud into your ear and it syncs with your phone (which typically seem to be little booklet-style devices with cameras on at least two sides), and the voice of the operating system allows you to navigate whatever you might be navigating (news, email, presumably Future Twitter, etc). Then the next-gen OS comes out (OS 1,  a nice touch of nomenclature that sounds entirely in line with modern technology naming schemes), which offers genuine Artificial Intelligence. Theo buys and installs OS1 and Samantha (voiced by Scarlett Johansson) is born– if that’s what you want to call it.

Samantha, from the first minute, is a real life character in this movie, every bit as fully formed as Joaquin Phoenix’s Theo, who has the advantage of being able to move his face around to go with his acting. Samantha learns and grows and her relationship with Theo does too; for a movie people are summarizing as “a guy falls in love with a computer,” it’s important to note that the relationship goes both ways. She may not have a body, but Samantha’s hopes and dreams are fully realized– often in ways that Theo’s are not. In terms of the acting, both performances are amazing. Much praise has already been heaped on Scarlett Johansson’s voice-only performance, but Joaquin Phoenix deserves a lot of credit as well. He is particularly good in this movie at mixing many emotions into one expression in totally natural ways- that kind of “Wait, what? Is this really happening? It might be good, so I’m excited, but this is so weird, and kind of strange…” conveyed all in one crooked smile and furrowed brow. I, personally, hated Joaquin Phoenix as an actor after last year’s The Master, but this won me over fully again.

For as simple as this premise is, Her has surprising depth. It explores all parts of this world, probing corners you didn’t realize existed until it points them out to you. Can a man be happy in a relationship with an AI voice? Why? Why not? What needs are met and not met? Which ones matter? Can an artificially intelligent operating system be happy in a relationship with a man? Why and why not?

The production design is just beautiful throughout. If they shot Gravity in space (a popular allegation, particularly for those of us who were a mite seasick watching it in the theater), they shot Her in the future. Not the extreme future, this is no dystopia, but a generally pleasant future with more rounded curves, where everything is brighter and whiter and colors pop in very slightly different ways. And all the men wear their button-down shirts tucked into their high-waisted khakis.

Director Spike Jonze makes some phenomenally interesting choices in this movie that continue to amaze me a week later. There’s a sex scene in this movie that I would call the boldest I’ve seen all year– maybe ever– and is simultaneously is the most minimalist, strangest presentation choice. There’s actually an awful lot of sex in this movie for the fact there’s no nudity at all.

The most fundamental thing you can say about Her is  that it’s fully-formed. The world, the technology, the way people move in it: completely realized. The characters, whether they have corporal forms or note: fully fleshed out. The effect it has on the viewer, regardless of the size, shape, or physical nature of the relationship: fully and totally effective.