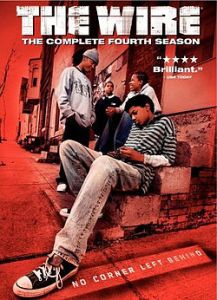 Welcome to the Inanimate Blog watchalong for The Wire. Every week we’ll be watching two episodes and posting our thoughts. We’re not recapping each episode in detail; that’s what Wikipedia is for. This week is Season 4, Episodes 12 and 13.

Emily: I think I held my breath through most of the cold open until it was clear what was going on. Then I was scared for Michael in a whole different way. Sure, Chris and Snoop aren’t going to kill him, they’re just going to steal away his future. He’s now on the path to scary gang enforcer.

Sam: They played that so well. They held it just one beat longer than I expected even if it was going to be a joke so even though I didn’t believe it, they sucked me in just before the reveal anyway. Michael… is kind of scary. Kenard, tiny loudmouth that he is, is pretty awesome, and Michael kind of beat the shit out of him. Which, I mean, is really great for his future in the The Game; he shows all the right kinds of initiative. Which, yeah. Is kind of not great, all told. Poor Namond, though. He’s really not cut out for that life.

Emily: In a way, Namond’s contrarian nature is what makes him bad for gang life. He’s not cut out to do what his mom and dad tell him to and his mom is particularly pushing hard for him to be a good soldier.

Sam: Yeah, I think you’re right. He also doesn’t seem to have the stomach for it, or maybe the backbone. Or both. Michael was the one telling him he needed to come down on Kenard, and Namond definitely doesn’t have the same tolerance for violence. I didn’t either in this episode, quite frankly. There’s a lot of sad shit that goes down here. We’ll get to all of it, but I’ll start with poor Randy and his poor, poor foster mother. She was good to him, and he knew it and appreciated the hell out of it. She didn’t deserve to have her house burned and land in the hospital for her foster son doing what is ostensibly the right thing. Talking to the police shouldn’t have life-threatening consequences, and yet it totally does…

Emily: And Carver was so, so angry on his behalf that the unmarked car surveilling their house was totally obvious. He’s turned into a really excellent public servant. Kima should be proud.

Sam: He’s really come around, in a way that Herc hasn’t. The intersection of Herc and Kima here is Bubbles, and man, that was rough. He’s not a killer, we know that. I mean, he could have been, but we’ve said before that he’s the best, purest, most good-natured character on this show. And so for him to be contemplating murder, and have it end up with the accidental death of a person he had taken great strides to try to protect… that was rough. Unnecessarily rough.

Emily: My heart absolutely ached for him. It’s too bad that any other cop but Walker had been the one he went to about his tormentor. If someone had intervened way back then, he wouldn’t have had to think about taking matters into his own hands.

Sam: There are so many ways it could have been stopped. I think back to season 1 and get mad all over again that he almost got clean and stayed out for good, but it was for the police he went back undercover (and I don’t even remember the circumstances, I just remember him getting sucked back in and doing it for Kima). And then if Herc hadn’t let him down, twice. Just… argh. So frustrating. At least there’s one good cop in the world, because Freamon has his supervisor back. The “most effective supervisor in the police department,” even. That beach house isn’t going to build itself!

Emily: Daniels is pretty good at this higher administration stuff. Put the person in charge who’s going to give the police doing real work the most room they can have to really get shit done. It helps that they have a mayor who cares about solving crimes that actually happen. Even without the added benefit of the stats counting towards Rawls instead of Carcetti if the bodies in the vacant houses are uncovered by the end of the year, he wants those houses opened and those cases started.

Sam: It’s certainly A Thing. Our favorite Thing, of course, is whatever Thing Omar is up to now. This is surely his most successful coup. As someone or other says, he didn’t just steal a package, he stole a shipment. Literally every major dealer in Baltimore is screwed. So great.

Emily: It’s totally worth Omar being either non-existent or low-key since he got out of jail. He was just getting ready for the main event. He’s a big picture kind of guy.

Sam: He sure has the best read on this situation, as he then negotiates selling it back to the dealers. There are two great tidbits I loved here: first, Prop Joe is no idiot. You’ll note that while Omar’s charging him 20 cents on the dollar, Joe’s charging Marlo 30. Good job. Also, Omar and his clock. Like buying cigarettes and getting his change after briefly shooting up that convenience store. Omar is the best.

Emily: Omar is chaos and while you don’t want chaos in your actual life, it’s ridiculously fun to watch on a TV screen.

Sam: You know what’s not fun? ALL YOUR FAVORITE CHARACTERS DYING. ARRRRGGGHHHH. I accept that people are going to die on this show, but do they have to be people I like? I was the president of the Bodie fan club these past two seasons at least, and he was my shining example of “character you didn’t expect much of who turned out to be a real person and reasonably significant.” And now he’s dead, because there is no God. My notes for this read simply: “I hate everything; Bodie.”

Emily: What’s particularly sad is that the workplace comedy you so loved between him and a few members of the Baltimore police force is what got him killed. If he isn’t seen getting into McNulty’s car at central booking then he doesn’t die, at least not at that particular moment.

Sam: Which just reinforces my ranting point about Randy earlier. The cops shouldn’t be the enemy, or at least, they shouldn’t be so much the enemy that just being seen with them gets you killed. Goddamn. So frustrating. This episode was a serious heart-wringer, because not only did Bodie get killed, but oh, god, Bubbles. Like the intro to the last one, they let it go on just one beat longer than I thought it could and still come out right. Just heartbreaking.

Emily: And yet, this just might be what saves him. He’s clean, Kima brought the guy from the NA meetings in the first season in to see him. If you’re not on drugs then you can’t accidentally take some that have been laced with sodium cyanide. I hope the show at least gives us that. Give us one tiny, happy thing.

Sam: You know what isn’t happy? Randy getting beaten and harassed in his new group home. For serious, episode, you’re a real downer. And next season will be a new institution, which means new people to learn. I hope to hell it starts out on a lighter beat than this one ended. I mean, it must have, since you don’t hear about people on suicide watch from this show, and you surely would if it kept this up. I’m really down on this ending, can you tell?

Emily: Even Prezbo had to have his bubble popped. Dukie is no longer his student but he’s clearly not ready for high school. The most responsible person in his life is probably Michael and as we established last episode, he’s not exactly on the best path. It will probably make Prez a better teacher in general but he’ll never have a student he cares for and guides like Duquan ever again.

Sam: So much rough stuff in this episode, even if this is more sentimental than gut-punching. I was a bit lost on the finer points of that scenario, though. Did he switch at the semester, or something? Because they clearly set things up to be Christmas-y times, and then he’s switching schools. That felt super weird to me.

Emily: Yes, the vice principal had a bunch of students in her office in an earlier episode and told them that, due to their ages, they would be promoted to high school at the end of the next marking period. I’m not sure how that is supposed to work, either. Do they do the second semester of ninth grade and then start ninth grade all over again in the fall or do they just get promoted to tenth grade because the system has given up on them at this point? Either way, it’s a really messed up situation all around.

Sam: That’s for sure, and the only real thing you can say about any of it. To cap things off, Marlo is doing Marlo things (staring, nodding meaningfully at intervals, saying two words and somehow making it a fully elaborated demand). Vondas is back from season 2, because those smuggling Greeks still be smuggling. Prop Joe was right in trusting Vondas to not want to deal with anyone but Joe, but you can’t help but assume Marlo’s got something up one of his pigeony sleeves.

Emily: Do not underestimate Marlo. That is probably the biggest lesson I’ve learned from this show. He’s a sneaky, crafty, ambitious gang leader. He almost has some Stringer Bell qualities in how he operates.

Sam: You said that just to twist the knife, didn’t you? ALL MY FAVORITE CHARACTERS ARE DEAD. WAHHHHH. At least we have one bright spot in this episode, which is that Wee-Bey and De’Londa have ceded control (custody?) of their son to Bunny and his wife. It feels like a weird pairing but ultimately right for everyone involved.

Emily: Colvin’s program is unfortunately shut down but at least he gets to keep helping one of the most promising students from it. Wee-Bey has a bit of an ego and the idea that his son could really make something of himself outside of gang life is appealing to him. On top of that, the major crimes unit is officially back together! McNulty is out of his uniform and Kima is back in casual clothes and a cap. Things feel right again.

Sam: I’m a little worried about McNulty and his ability to stay on the straight and narrow, but he’s had a whole season off (at least a year in show time, maybe more?) to get really, thoroughly clean and settled in with Beadie, so I’m optimistic. One more season to go, as sad as that suddenly is. See you next week?

Emily: See you next week!