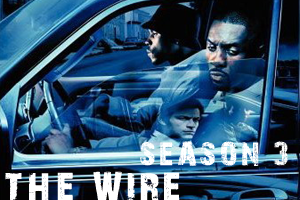 Welcome to the Inanimate Blog watchalong for The Wire. Every week we’ll be watching two episodes and posting our thoughts. We’re not recapping each episode in detail; that’s what Wikipedia is for. This week is Season 3, Episodes 5 and 6.

Emily: We’re back! And so is Bubbles. Everything is better with Bubbles around.

Sam: It is! I was so happy to have him back in my life. He had some particularly great lines to start this episode. I, for one, am going to accuse people of “equivocating like a motherfucker” all the time now. Also, when he agrees to do the short con with the guy on the ladder, he says something like “With a white man, I better be the bad guy. Wouldn’t want to confuse him.”

Emily: He’s always been a pretty good amateur sociologist. It’s what makes him a good CI. Kima knows it.

Sam: He’s pretty canny, for his socioeconomic position. It’s a huge part of what makes him so great. The start of this episode had a great one-two punch of Smart People Making Hilarious Comments, because in the next sequence, Stringer Bell offers to sell McNulty a condo. “Where are you living now? Interested in moving downtown?” He even offers to help him with whatever legal documents he might need copied. Stringer Bell is the best.

Emily: He really is. But McNulty is completely on to him now. Stringer got in a few good jabs there but McNulty was doing the one thing I truly like about McNulty. He was being good police the whole episode.

Sam: We’ve said it all along: for as much of an asshole McNulty is, he’s pretty much always an asshole in service of the job. On the flip side, I’m increasingly disappointed by both Herc and Carver. When they were around in season 1, as just part of the team, I liked them and their goofiness. But now we see more and more that they’re exactly the kind of dicks that give all police officers bad reputations. I kind of appreciate them being there for the perspective, though.

Emily: Kima and Daniels kept them in check. The comparison between them and McNulty was made pretty clear this episode. In the beginning of the season, they were making fun of Bunny’s insistence that you should always know exactly where you are. This episode, we see that McNulty clearly respects Bunny and is even a little nostalgic for his early days under Bunny’s leadership. What I’m saying is that I like pretty much everything about Bunny.

Sam: You make a great point. The lines were pretty clearly drawn between the Good Police and the rest when the Bunny-McNulty, I mean, Bushy Top, connection was revealed. Good Police, as represented by those two, occasionally have some very strange ideas about how policework should be done, and they usually seem to pay off. Hamsterdam is a rollicking success, so far.

Emily: It’s perfect. Mid-level lieutenants are mostly on board and a bunch of junkies get a one-stop shop for all of their drug purchasing needs.

Sam: I thought that whole part was so great. Starting with Johnny shaking his head and thinking the cops didn’t even bust him properly, and instead he’s transported to this magical world where all the drugs are readily available right there from every dealer, and a cop is giving him advice! It might very well be heaven on earth for the junkies of west Baltimore. In less exciting news (for us viewers), Avon is out of prison. I think the best thing the show did was to send him away for a season and not care too much while he was gone. Hmph.

Emily: I agree but I’m interested to see what kind of chaos he brings. He’s always been mostly a non-entity for me. A figurehead gang leader while Stringer did the real moving and shaking and the rest of the crew were the actual gangsters. He has a chance to shake things up. Stringer is going to hate it.

Sam: I think you’ve identified why I’m so annoyed by him when you say that Stringer’s going to hate it. In season 1, they were kind of one undifferentiated unit of Head of the Barksdale Gang. Then when String got to spread his wings and run things basically on his own, he took things in a much cleaner direction. He has non-drug-related ambitions in the world. But during the same stretch, Avon was only more and more entrenched in the street-level part, being incarcerated for drug-related reasons. He doesn’t have the same perspective Stringer Bell does, but more significantly, it’s starting to look like he doesn’t want to have that perspective.

Emily: The “co-op meeting” that Stringer held is against everything that Avon believes in. You don’t work with the other big time dealers in town, you compete against them to be the biggest and baddest.

Sam: Whereas Stringer doesn’t have the same instinct to fight. He knows that there are better ways and is fine with breaking old time street-level rules to benefit everyone. Can we take a quick moment to appreciate that he’s holding the meeting in a hotel conference room? It’s impossible for me to love him any more than I already do. And a quick shout out for the adorably dedicated lacky who took down the minutes of the meeting, because Robert’s Rules of Order. Duh.

Emily: If we were lackies in a drug organization that followed Robert’s Rules, we would be that lacky.

Sam: He’s just following the rules! He read the book he was supposed and now it’s doing what it says. Truly a lacky after our own hearts.

Sam: New episode, 360 degree jump in legality, socioeconomic status, and skin color. I just love Carcetti. It’s so strange to see someone using their occasionally sleazy power… for good. He actually, really, genuinely wants to improve the city of Baltimore and is ready to use political machinations for an actual good purpose. In related news, is playing racquetball the most City Council thing you can do?

Emily: It’s certainly one of the most upper middle class things you can do. Carcetti is so great, racquetball and all. He’s working to clean up the streets through politics while Bunny is trying to make that happen through turning a blind eye to what he thought was an unoccupied area of Baltimore. That poor old lady.

Sam: I do feel bad for her, especially when she’s all “Why do I have to move? Why can’t you fix the drug problem?” Since, uh, Bunny put that drug problem there intentionally. But it’s working so well otherwise, I kind of feel like moving her is worth it, even though it’s her home and has been for decades. We’ll see. In the meantime, I’m super amused at the rounding-up-the-recalcitrant-dealers montage. They were warned…

Emily: This is where the police who are a little too amused with fucking with people on the streets were really effective. Take note, Herc and Carver. You can be a bit of a jackass without being completely awful.

Sam: Exactly. It’s all in the tone of the interaction. Don’t go in ready to be a dick. I was sad this episode for that reason, when Bunk’s conversation with Omar went so badly. We know that Omar isn’t averse to working with the police (after all, Omar will do just about anything that benefits Omar), but Bunk just handled it badly and now that bridge is probably pretty well burnt.

Emily: Speaking of ruined relationships…I’m not sure that Stringer and Avon’s friendship or business relationship is sustainable for much longer.

Sam: The way Avon is so focused on the streets when Stringer is so not is a problem and only going to be a worse problem. Avon’s inciting physical violence and murder, and, as a reminder, he just got out of prison. That’s not optimal.

Emily: And if tensions are already high between them when Avon finds out that Stringer ordered the hit on Dee, then we could be in for some violence. Even if Avon doesn’t blow up, D’Angelo’s mom might.

Sam: It’s definitely the kind of important detail that’s hanging around and seems like it’s going to be pretty sigificant yet. And now, I’m not even doing a smooth transition, cause the show hasn’t cared about transitioning smoothly to him yet: Cutty. I just… don’t care. I think there’s a value in having a role in the show straddling that line and doing the “Should I be a drug person? Should I go straight?” thing, but Cutty himself just… doesn’t compel me to care. And they’ve so forced it- there have been so many parts of just him by himself, trying out lawn care and whatever else.

Emily: They seemed to have confused showing him wavering about which direction to go with not having to make him a strong character. Carcetti, Stringer, McNulty, Bubbles. These are all characters who aren’t straight up in what they do but they’re still characters that you want to watch. Cutty just sucks the energy out of the proceedings. He doesn’t want to work hard at going on the straight and narrow or at being a dedicated member of the Barksdale operation.

Sam: You’re completely right and I agree with all of those points. I’m just sure, knowing the way this show toys with us, that they’re going to kill off Carcetti in four episodes and we’ll be stuck with Cutty forever. At least most people aren’t boring on this show, so maybe it’ll pick up for him again.

Emily: He’s almost certainly going to be important near the end of the season and that’s part of why I hate him. He’s just this big giant anvil waiting to drop in a show that usually works in subtleties.

Sam: I’m ready to see where it goes. See you next week?

Emily: See you next week!