I’m mostly happy with this year’s Emmy nominations. The problem with that is that that means that the Emmy nominations are really boring this year. The nominations I was really pulling for that didn’t happen would have been major surprises so I can brush off most of my upset. I have some minor quibbles over some nominations that I would have liked to see over others but there is only one missing nomination that I am truly upset over.

Tatiana Maslaney (Orphan Black) deserves an Emmy and she didn’t even get a nomination. In fact, if Emmys were awarded by roles played instead of by the performer, you could make an argument for her being eligible for Outstanding Lead Actress, Supporting Actress, and Guest Actress in a Drama. Not only that, but Orphan Black received zero nominations. Not for writing, casting, directing, or anything technical and that show pulls off amazing feats in each episode. It’s things like this that make me wonder if the Emmy voters even watch TV. I would have gladly given up Michelle Dockery’s (Downton Abbey) nomination for Maslaney. For that matter, Kerry Washington (Scandal) could be traded out for Elisabeth Moss (Mad Men) who didn’t have a particularly outstanding season but is still good. I really want to see Mad Men get an acting Emmy one of these years and I’d be thrilled if Moss was the one to win it.

Other shows that I felt were snubbed overall were Hannibal and The Americans. I love Hannibal but it’s gory and slow moving so I understand that it’s not everyone’s bag. The one thing you can’t deny about Hannibal, though, is that it’s gorgeously shot. The one nomination it deserved was in Cinematography for a Single-Camera Series but I guess that it was more important that two Game of Thrones episodes get nominations in that category instead of making room for one episode of Hannibal and I say this as someone who also thinks that Game of Thrones is gorgeously shot.

The Americans got exactly one nomination and it was for Margo Martindale as a guest actress. That’s it. Even in an off-year for Mad Men, they still got eight nominations while The Americans got one nomination for a second season that was even better than its excellent first season. At least the Emmy voters do seem to be getting on the bandwagon for FX shows in general more than they used to.

Since FX isn’t being entirely ignored anymore, both American Horror Story: Coven and Fargo picked up a lot of miniseries or movie nominations. The category itself is less crowded than drama which explains more AHS nominations than it necessarily deserves but I am so pleased with all of the Fargo nominations. I was so uncertain going into that show but it didn’t take long for it to win me over. I’m pulling for Allison Tollman to win Outstanding Supporting Actress in a Miniseries or Movie so hard, even though she was totally a lead actress and even though you could make the argument that Fargo (and AHS, for that matter) should compete as a drama and not as a miniseries.

HBO decided to take their show that could compete as a miniseries or a drama and submit it as a drama. I’m going to leave the initial reaction to this up to my partner in crime: 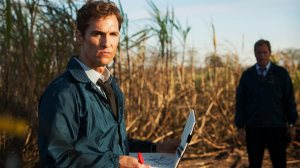 Sam and I both adored True Detective and have been following all of the casting and directing rumors with nervous anticipation. I do still think that HBO should have submitted it as a miniseries since the precedent has been set that continuing series that tell a self-contained story over a 13 episode or shorter span per season are considered to be miniseries but clearly this was a good way to go because it picked up 12 nominations, including two for lead actor for Matthew McConaughey and Woody Harrelson, best writing, best directing, and best drama series. Orange is the New Black, which is competing as a comedy for its first season due to submission deadlines, also received 12 nominations and only Breaking Bad received more with 16 nominations for the second half of its final season. HBO was the big nominations overall with 99 total.

Woody Harrelson has already gone on record saying that he would like his co-star and fellow nominee to win. I would too because McConaughey can do no wrong lately but I won’t be utterly shocked if Bryan Cranston (Breaking Bad) gets the win one last time. Either way, best actor in a drama is definitely the most exciting category for this year’s Emmys.

Posts breaking down the different categories and explaining why things are nominated in categories when they seem to make more sense in others will be coming between now and the awards ceremony on Monday, August 25.