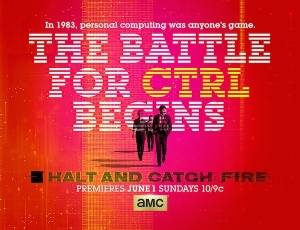 I could tell you that I’m interested in this show because it’s geeky and it’s promising in a way that could return some prestige to AMC after several flops. That’s mostly the truth. Really. I also really love the potential of the two female characters. Davis’s Cameron Howe is brilliant, brash, and just a tiny bit vulnerable. Bishé’s Donna Clark is a gifted engineer in her own right who has made sacrifices in her career in order to be able to support a family while still understanding why her husband (McNairy) would be excited by taking risks in order to build a PC to rival IBM. What really brought this series to my attention, though, was Lee Pace.

Pace was wonderful as the shy pie maker with a secret power in Pushing Daisies and while his character in Halt and Catch Fire is quite different from Ned, he still brings a certain sparkle to the role. Joe MacMillan is much more like the geeky, 1980s computer industry version of Don Draper, complete with the slightly suspicious past. You can’t help but be excited with him and Gordon Clark (McNairy) over things like BIOS.

Halt and Catch Fire airs on Sunday nights on AMC at 10/9c.