64 episodes in 64 days! Tonight, I get to see the movie. It’s a pretty good day to be a Veronica Mars fan. I know that a lot of people were disappointed that the series ended as it did but I actually thought that it was kind of perfect. They told us that Keith and Veronica Mars were back to being at the bottom of the heap without giving a pat answer to every question. It was very noir. Don’t think that my inner fangirl isn’t super psyched for the movie, though. I did give to the Kickstarter, after all.

This episode felt like it was written to give Kristen Bell a bit of a break. A lot of the rest of the cast did the heavy lifting and a lot of Veronica’s scenes were spent in the Balboa County jail.

It turns out that the coach had Creutzfeldt-Jakob disease, which is the human form of Mad Cow disease and he arranged for his assistant coach, who looks quite a bit like his son Josh, to make it look like he was killed in a carjacking so that his wife and children could get the giant payout from the double indemnity clause in his life insurance policy because his younger son’s autism was a drain on the family’s finances. Sometimes the Veronica Mars writers tried a little too hard to come up with unique cases. Josh ran off to Mexico until it was safe for him to come back and explain that he wasn’t the one who killed his father yet still allow his mom to keep the money.

In less complicated scenarios, we see a bit of Logan and Veronica being emotionally mature. They’re trying to be exes who are friends. They’re both emotional boiling pots so it probably can’t last but they’re trying.

Neither of them should probably be in a relationship right now but if Logan’s going to be, Parker isn’t a bad choice. She’s been through something but she’s mostly a normal college freshman who hasn’t been through turmoil with him. Still, for her own sake she should stay out of a relationship with Logan Echolls. He is not good for her. Run, Parker!

On the other hand, Bronson might be perfect for Mac right now. He’s a little older than her and he’s got a serene maturity about him. She’s comfortable with him which is a huge step for Mac. She got burned on her first time out of the gate but this time is going much better.

The biggest thing to come out of the episode is, of course, that Sheriff Lamb is dead and Keith is acting sheriff. The tides of changed and things don’t look good for whoever killed the dean. Someone who respected the man is now fully on the case.

It’s time to wrap up the dean’s murder case! Tim Foyle may have taken more action than anyone would have expected him to but in a completely twisted way. If he had devoted that creativity in his coursework, Landry might have given him a positive recommendation to Pepperdine. The fact that he thought that the solution was to frame his professor in revenge is so messed up. Also, even when he goes so completely off the course that you would expect him to take, Veronica Mars is still smarter than him.

Poor Mindy. Buying a boat was a really stupid thing to do and she wasn’t an innocent but she didn’t deserve to die. Landry’s career is undoubtedly over. Even if he gets off of the murder or manslaughter charge, it doesn’t look good when a student that you considered to be only a bit above average almost successfully frames you for murder.

Veronica is an actual PI now! At 19! And her dad is still just a little bit better than her. She would do good to remember that. Her first case goes a little clumsily but overall, I think her clients are OK with the outcome. They don’t need revenge and Rashad seems to at least be willing to entertain the idea of Amira dating a Jewish man.

Keith cracks down on fake IDs used by Hearst students which doesn’t make him popular with Veronica’s friends and classmates. Also, the IDs that Veronica made for Piz and Wallace back in “Spit & Eggs” comes back to bite them in the ass. Between being arrested and providing fake IDs to minors, the writers are laying the tracks for the fact that Veronica could be a huge liability for Keith in the upcoming special election for sheriff.

Piz, step away from Veronica. She’s bad for you.

It’s strange how Wallace seems to think that Piz is being normal Piz by ignoring Veronica. Piz has been hung up on her since they met. Barely acknowledging her existence is not normal Piz behavior.

We get to see Rob Thomas, creator of Veronica Mars, as a musician, further blurring the lines between him and the frontman of Matchbox Twenty. Not helping, Rob Thomas.

Also, while Veronica might not be good for Piz, Piz is also not that smart. TV hotel robes are almost always white. A blue hotel robe, Piz? Really? The backing tapes could have been found so much sooner and then we might have been able to avoid the Piz and Veronica cutesiness that is about to be unleashed upon us for the next few episodes. At least we got some Paul Rudd. The man is ageless. Also, Mac, have a relationship with whomever you like. You’re doing great.

I have complicated feelings about the Invisible Children charity. Ryan Hansen works with them a lot and got members of the cast and crew interested in the charity which is why we have this episode. Invisible Children was the charity behind the somewhat problematic Kony 2012 movement a couple of years ago and they’re often accused of spending more time selling merchandise to wannabe activists and less time doing actual activism. They might be well-meaning but there is a question about their effectiveness.

The actual case is one of those that shows us that while Veronica is quite accomplished for a 19 year-old, she is still developing her PI skills.

Logan, the fact that you didn’t even consider the fact that your girlfriend might want to see you a few times over the summer is a giant sign that you are not ready for a normal relationship. Run away, Parker. Run away now. Definitely put your foot down when it comes to how much your parents want to control your life but don’t do it through Logan. Do it for yourself.

Veronica is just as bad at communicating with her boyfriend about summer plans. A perfect time to bring up the potential internship in DC would have been when Piz brought up the Pitchfork one in New York. She was suitably excited for him but it didn’t quite connect that he was totally fishing for her summer plans when he brought it up. Of course, deciding on whether or not to take an internship on what your boyfriend or girlfriend is doing when you’re a college freshman isn’t usually a  good idea but telling someone you care about and like spending time with about your plans in the coming months is.

For the summer, Parker will be going back to Denver, Veronica will be off in DC with the FBI, Logan may or may not be bumming around Neptune, Dick’s going to spend time with his dad (which is a horrible idea), Piz will be doing an internship in Neptune, and Wallace will be off in Africa helping Invisible Children. Had the show gotten a fourth season and set it at Hearst, it would have been very easy to set up all of the exposition since the characters would have been scattered about the world and they’d have to catch up with one another. 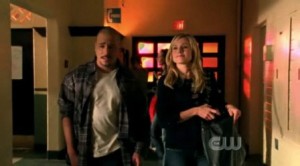 We’re going back to Neptune’s roots: class warfare! The Hispanic ex-con is easy to deny workman’s compensation to and also easy to frame for a crime. Wealthy kids steal from the college for amusement and to make their lives a little bit easier. Unfortunately for them, Veronica knows that Weevil doesn’t really like to help out rich kids, even if he also benefits. Of course, Weevil might still start a fake ID racket because it’s really easy to turn back to a life of crime when people don’t want to believe that you can change.

Logan is still messed up when it comes to Veronica. Sure, she wouldn’t want to be taped in an undressed state but she’s also gotten pretty good at reading people. It’s unlikely that she would be with someone who would tape her and release that recording to the world. He still needs to stop for a few seconds and think. Bring the evidence to Veronica, don’t just go and beat up the guy who you think is the most likely culprit.

Secret societies aren’t just a specialty of the high school in Neptune. Hearst College has its very own with The Castle and they seem to have way looser morals than the Tritons. Releasing a tape of a young woman having sexy times with her boyfriend just because you happened to have recorded it while running surveillance on an unrelated party is pretty crappy.

Jake Kane is back and it seems like he has become very bitter in the past two years. Of course, why shouldn’t he? The justice system failed his daughter and he effectively lost his son and granddaughter very shortly after actually losing his daughter. His wife played a large role in why Duncan felt that he had to take Faith/Lilly and run so he doesn’t even have her to commiserate with.

Of course, the real reason that Jake is so mad is that Veronica has decades of secrets from some very prominent men. She is a very sharp and pesky thorn in his side.

What this episode comes down to, and the entire series, really, is that Keith is still the world’s best dad. He puts his future in jeopardy to protect hers. He knows that the reporter is onto the piece of evidence that he destroys and that the news is likely to break before the election but he takes a really big magnet to the DVR and destroys the recording of Veronica breaking into Jake’s house. We don’t know that Vinnie van Lowe becomes sheriff but it seems to be the obvious conclusion.

What I Want Out of the Movie 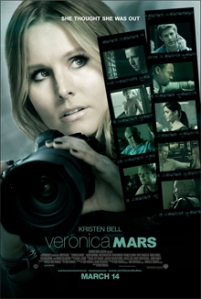 A Veronica who has grown up. From everything I’ve seen, we’re getting this, at least on the surface. She’s a lawyer in New York who has left everything from Neptune behind. Of course, she gets drawn back into southern California and Logan’s problems because we have to have a reason to have a movie.

There has already been a book announced that takes place after the movie. It’s nice that they’ll be able to do anything they want with any character and not have to rely on budget or actor availability. There is a hope for other books. I hope that if Veronica and Logan end the movie together and continue that relationship into the books that they’ll let them be happy. It makes sense for them to be tumultuous when they’re teenagers that have been through a load of crap in their young lives but if they’re going to be together as adults then they should be together. If they can’t be, then they just shouldn’t. We got maybe one full episode where they were together and not constantly sniping at one another or doubting the relationship. As adults, that’s unsustainable. Thus spaketh my inner fangirl shipper. I don’t address her often but she had something to say.