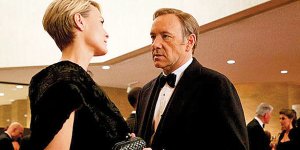 This Friday, Netflix will be dumping all 13 episodes of House of Cards season 2. Last year, I watched all of season 1 over two or three days. I can remember the basic arc of the season but I’d be hard pressed to come up with details without some prompting. In the age of streaming availability where binge watching is easily possible it’s also just as easy to spread a season of TV out over several days or weeks.

Fred Armisen and Carrie Brownstein poked a little fun at binge watching Battlestar Galactica on Portlandia. The pop culture we experience can be more than entertainment but it shouldn’t become our entire lives.

Some shows are kind of disposable. Watching syndicated episodes of Friends or Law & Order isn’t exactly binge watching. There’s also a subtle difference between marathoning and binge watching. I think of marathoning as rewatching a beloved favorite while binge watching is trying to watch as many episodes in a row as you can in order to catch up with a show.

I know that a lot of people would binge watch Breaking Bad during the hiatuses between the last few seasons in order to catch up with everyone who would talk excitedly after each new episode. Breaking Bad is exactly the kind of show that you should not binge watch. Many episodes are an adrenaline rush and you need some time to absorb that. You don’t necessarily need to parcel the episodes out once per week but one episode per day is perfectly reasonable. Even two episodes per day on a weekend or day off with one in the morning and one in the afternoon would be OK.

If you’re running low on good shows to watch, binge watching is OK for something of lower quality. While Nashville started strong, it leaned towards its soapier qualities pretty quickly but going from one episode to the next helps you gloss over some of the weaker plot points. Sitcoms, even those of a higher quality, also make for great binge watching. If you haven’t already, try Archer or Parks and Recreation.

When the show is good, allow yourself to spend some time with it. Streaming lets you watch as many episodes in a row as you possibly can but it also means that you can probably take your time with it. There’s no rush to return a DVD rental or your friend’s box set. Unless you hear that Netflix is suddenly going to pull Scandal, give yourself time to take in that crazyfest. You’ll still be able to join in with the live Tweeting during new episodes eventually and you’ll be better off for it. Since House of Cards is a Netflix original, I know that I’ll be perfectly fine if I only watch an episode or two a day. Spreading out the joy of Robin Wright being a perfect ice queen is totally worth it.