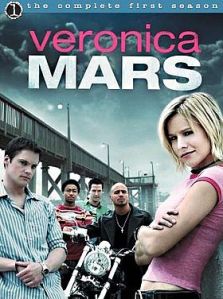 After another week, we’re already two-thirds of the way through the first season of Veronica Mars and things are starting to move in the Lilly Kane murder case. There was also a good amount of character development to go along with it.

This episode seemed to rely heavily on the idea of a family of choice over a family of origin both with Cole and the Moon Calf Collective and Veronica coming to terms with the fact that Jake Kane may be her biological father.

Keith Mars is a great dad and a great person. While he is a law-and-order former sheriff who honors the letter of the law more than his daughter, he didn’t call Rain into child services. His instinct was to call it in but he also listened to his daughter and took into consideration the best interests of a teenage girl. Rain had found a loving family.

While Cole eventually did end up back with his family  and a fancier Porshe than the one he sold instead of living with the collective, there did seem to be a small change in him. While “‘Sup, Veronica” is a greeting that might be frequently deployed by your average teenage douchebag, he was still acknowledging the person that was by his side as he dealt with his grandmother’s death. Returning home may have actually been a way of honoring his grandmother. He took control of her fortune, giving his parents the support that they are unable or unwilling to provide for themselves. He’s caring for them monetarily but probably not emotionally.

The very subtle softening of Logan Echolls is on a roll. He still shows many signs of being Neptune High’s “obligatory psychotic jackass” but his life isn’t exactly sunshine and rainbows. This episode deals with image and perception. Sean as a kid from a wealth family, Aaron as the perfect celebrity family man, Duncan as drunk, Connor as a man of the people, and Weevil as a dumb juvenile delinquent.

Flashbacks are relied on even more heavily than usual in this episode but they are expertly deployed, helping us to parse each person’s version of the story. This is a device used often in the first season of the show that unfortunately isn’t used as often or as expertly in the two seasons that follow.

This episode is named after the E String Strangler case that Keith is working with Sheriff Lamb but it’s the Mac and Madison storyline that’s more memorable to me. Being switched at birth is pretty sensational. In the dispute of nature vs. nurture, both girls seem to favor their biological families more than the ones they were raised in. It’s an interesting stance for the writers to take while Veronica’s paternity is up in the air.

Lamb loses at life for not being familiar with Spinal Tap. Oh, and for being really bad at his job, but mostly for not recognizing “Hellllloooo, Cleveland!” Keith Mars for Sheriff! Why wouldn’t you support a man who has a healthy respect for women, gleefully quotes This is Spinal Tap, and is an excellent investigator to boot?

We see Veronica starting to take some huge risks when it comes to the Lilly Kane case. Going into the evidence lockup and risking Deputy Leo’s job was bad enough but targeting the man that’s responsible for putting an innocent man in prison and driving your mother out of town is quite another.

It’s another ride on the Logan Echolls Sympathy Train. To be fair, years of abuse from his father and the apparent suicide of his mother are pretty good reasons to feel bad for a guy.

While dealing with alcohol poisoning of a high school student, a potentially expensive lawsuit, criminal charges for Veronica, the grief of high school students after the murder of one of their peers, and the aforementioned apparent suicide are serious things, this is actually a pretty light episode. Streaking through hallways, speaking in panagrams, and karaoke really lighten up the place. As you can see, many of use knew Kristen Bell could sing long before Frozen.

While things are light and fluffy, the obvious incompetence of the current sheriff goes a long way in justifying Veronica’s continued investigation into Lilly’s murder.

Up front, you should know that this is my least favorite episode of season 1. It just never quite gels. Perhaps because we really only see the subject of the case through Veronica’s memories of her in the few weeks that they were friends. I think this episode is trying to show how the children of people involved in entertainment can be screwed up by their parents’ actions as we are also dealing with Logan’s grief surrounding his mother’s funeral. There’s also something to be said about parents actually listening to what their kids are saying, especially as they grow into adults. Once again, Keith Mars is the best dad.

Hi, Adam Scott! I might hate your floppy hair in this episode even more than the fact that your character is a statutory rapist. You got Al from Step by Step pregnant! And Blair Waldorf wanted to take you down! Also, writers? Rooks, Bishop, and Knight? Subtle.

This episode felt a little disconnected to me. There’s not really anything in common between the Carrie Bishop vs. Mr. Rooks case, Duncan’s medical condition, and the possibility that Lynn Echolls may still be alive. It ends off feeling good, though. There’s a tiny glimmer of hope that Lynn may still be alive and we have a little progress in the Lilly Kane mystery. Without checking out Duncan’s medical files, she would have never figured out why Abel Koontz took the fall.

In other name subtlety, we have Kane and Abel. Oh, writers. Of course, the show is about a girl named Mars who live in Neptune.

As Logan grasps at the last chance that his mother may still be out there, Veronica helps Meg track down her secret admirer. This episode seems to show us that Veronica isn’t as jaded as she’d like people to think she is. She digs into tracking down the client’s missing Tom Cruz and Meg’s secret admirer. She empathizes with Logan’s search for his mother. Also, she’s quick at setting up a backstory but that wedding book was elaborate. Even if she made it as a dreamy-eyed girl before her world was shattered, she might have still have had it sitting around.

In the end, she lets go of Duncan for good, she gets a dance with cute, if mumbley Deputy Leo, and she finds her mom. Of course, her mom is drunk out of her mind and her recently discovered nemesis, Clarence Wiedman, is there too, but for Veronica it was a pretty good few days.