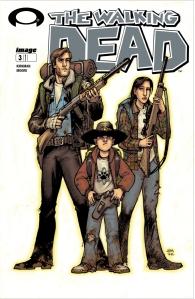 The third issue of The Walking Dead starts to highlight the differences between the comic and the TV series. We meet all of the members of the camp and there are a few different faces when compared to the show.

Instead of Daryl and Merle Dixon, we get Allen, Donna, and their twin sons Ben and Billy. There was a Donna with a husband named Allen and a son named Ben that were introduced as a part of Tyreese’s group on the show but the names were really the only thing that they had in common with the comic book characters. The names were probably used as a shot out to the fans of both the books and the show.

The camp has largely divided into traditional gender roles. Rick and Shane (yes, the book has finally given a name to Rick’s old partner) go off hunting while Dale and Allen watch the camp, Andrea and Amy watch the kids, and Lori, Donna, and Carol go to do laundry. Donna complains that it seems like feminism is being pushed back several years by this crisis while Lori thinks that they’re all just doing what needs to be done and that in this particular group the women are better at doing laundry while many of the men already know how to use firearms.

The discussion of how communities form in a crisis is always something I’m interested in hearing from post-apocalyptic fiction and I’m hoping that the comic book has a little more space to explore this issue than the TV show does. On the show, it gets a little boring when they stay in one place for two long (see: the farm and the prison) but maybe those kinds of things will play out differently in this medium.

No game has been found and the laundry is not done before they’re attacked by walkers in their different locations. The camp seems to have grown pretty complacent in the time before Rick arrived but that may all be changing.