So the Golden Globes came and went, and were remarkably pleasant during their stay. No one did anything really obnoxious and there were delightful highlights like Emma Thompson coming out to present carrying her shoes in one hand and her drink in the other. She tossed the shoes (literally) to take the envelope. She is the best.

In the land of television, the awards more or less made sense. Breaking Bad and Bryan Cranston were so in the cultural zeitgeist that it would be tough for the HFPA to ignore them. Robin Wright is a movie star and House of Cards generated super buzz as the thing that made Netflix a serious content generator. Behind the Candelabra was a TV movie in name only so it was no surprise when it won Best TV Movie or Mini-Series and Michael Douglas won for Best Actor. Elisabeth Moss gave a solid performance in Top of the Lake and it gives the HFPA the chance to say “Sorry we didn’t nominate Mad Men for anything this year.” I didn’t watch Dancing on the Edge but it’s just the kind of prestige thing that people who give awards out like to give awards to and since there were no women nominated from Behind the Candelabra, giving Jacqueline Bisset the supporting actress award was probably an easy choice for the HFPA.

The biggest surprises were in the three comedy categories and Best Supporting Actor. Brooklyn Nine-Nine has the seeds of a great ensemble comedy so this may be an award recognizing its potential. It really is an ensemble comedy, though, so the award for Andy Samberg is more on the strange side of surprising. I’m more than happy for Brooklyn Nine-Nine to get more recognition, though, and hopefully that recognition will become more viewers.

The only surprise TV award that was jarring was for Ray Donovan‘s Jon Voigt. He’s a major part of why I stopped watching that show. His character managed to be dull and disgusting at the same time. Every other nominated actor had a better year. This was blatant “award the movie star” behavior. I expected it to be the third part of a Breaking Bad or Behind the Candelabra sweep but instead they gave it to an actor that did a poor job in a horrible role.

Overall, January is a weird time to give out TV awards. While networks have been playing around with schedules in the past few years, my brain is still firmly stuck on the September through May TV schedule, especially when it comes to American shows. To nominate a TV show or actor for the end of one season and the beginning of the next is weird. 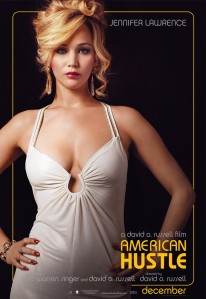 On the movie side of things, everything largely went as scheduled. It’s worth hammering home the point that the Globes have comparatively little predictive value for the Oscars, especially in what will be nominated, considering a) the voting constituencies for each group have exactly zero overlap and b) the nominations for the Oscars closed last week. That said, 30 of the last 34 actor/actress winners have had corresponding Globe wins first, so if we can get anything out of this, it’s that Jennifer Lawrence might yet trounce Lupita Nyong’o, and that Matthew McConaughey’s weight-loss buzz hasn’t faded nearly as much as previously estimated.

The category that was the most up in the air that has the least interest is score. Apparently Alex Ebert is Edward Sharpe of Edward Sharpe and the Magnetic Zeros, so that at least explains the hair.

The fun stuff comes where I expected things to lean one way or the other and went to a totally other thing. First, delight for Her getting the screenplay win, because it is awesome and inventive and wonderful. Hooray for rewarding actually good things instead of ostensibly good things. Second, hooray for Leonardo DiCaprio! I mean, okay, it’s not like he would have needed my sympathy if he’d lost, but I did call him tragically underawarded in my preview post. It was an awesome movie and he was awesome in it. I’m still not holding my breath for even a nomination for the Oscar, much less a win there, but it’s good to see good people rewarded.

In the foreign film category, I was pleased to see that the HFPA also thought that Blue is the Warmest Color was way too long. Well, fine, I don’t know that that’s what they thought, and The Great Beauty is supposed to be really good. I’m just pleased that Blue is done with for the season. It’s not on the shortlist for the Oscar nods, therefore, I officially never have to think about it again.

There were only two real surprises for the night. The first was not really a shock, but as I referenced earlier, it turned out that Matthew McConaughey, who was supposed to win this category since September, actually won this category. I thought that push had already faded. Apparently not!

And then, lastly, the one real shock of the evening: Best Song going to not only not “Let it Go” and not Please Mr. Kennedy, but a song by U2 about apartheid that no one whatsoever even knew was a thing. I would be shocked and confused and disappointed, if I cared even an ounce about these awards.

Arbitrary Bold Predictions for the Oscars: Even though the Globes don’t indicate a whole lot, here are some wild, random predictions for funsies:

So there go you! The Oscars Nominations prediction post will go up Wednesday, so look forward to oodles more real Oscar talk then.