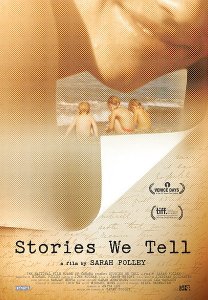 Stories We Tell is one of the most talked about documentaries from 2013, appearing on many critics Top 10 lists. My list will appear later this week, so no spoilers for now! I will say, it does live up to the hype.

The premise is very basic: in a family in Canada, one of the daughters may not in fact be the biological daughter of the man who raised her. However, the innovative presentation of the story makes the film about much more than that, touching on the very nature of truth and how we tell it. The daughter in question is Sarah Polley, a Canadian writer, director, and actress. She wrote and directed the documentary, which consists mostly of interviews with her own immediate family members and friends of the family about her deceased mother and the circumstances leading up to Sarah’s conception–a story which starts many, many years before.

What comes out in the recounting of Sarah’s mom’s life is a fractured portait of a woman where the cracked glass through which we see the picture is as interesting as the picture itself. As one interviewee says, “The same set of circumstances will affect different people in different ways.” Depending on whether you were her husband, daughter, lover, or colleague, you’re bound to have a different take on how these events did or didn’t unfold. And the fact that all these people have these conflicting opinions– and occasionally conflicting facts– means that the portrait they paint feels more true to life than if everyone described her the exact same way. Real lives are full of conflict and contradiction, and hearing everyone’s varied stories fleshes out Diane Polley in a way a glowing biopic never could.

One character declares that “the crucial function of art is to tell the truth.” But what is truth? What does it mean to be true? The more one interviewee digs into his stance–he says, in no uncertain terms, that since he was perhaps the primary person involved, the story is “only [his] to tell”– the more the viewer instinctively pushes back, since so many other people have just given conflicting accounts of the same story. The more he declares his version to be the only true one, the less you believe it and the less clear the entire situation becomes. Truth is somewhere in the middle- no one person is entirely true, but no one person is entirely wrong, either. It’s the conglomeration of facts and recounted memories and opinions formed years later that all blend together to form the “true” picture of someone’s life.

Some of the choices Polley makes both obscure and clarify the main point at the same time. For instance, all of the interviewees are identified by first name when they are first on screen and maybe once more, but not after that. They also aren’t ever identified plainly in terms of their relationship to Sarah- brothers and sisters are defined only through context, in stories. That makes for some pleasant moments of surprise when becomes clear why certain interviewees are there, but it also means it’s hard to pin down some of the actual mechanics of who was where when, particularly when it comes to a significant custody battle. The lack of emphasis on identifying any of the people talking lets the emphasis naturally fall on what it is they’re saying, which entirely to Polley’s credit. The decision to not diagram relationships or timelines or focus on anyone but the one person who can’t speak for herself gives the whole thing a pleasant and intriguing fuzziness around the edges.

Possibly the most mind-bending part of the movie is the elaborate recreations of her mother’s life and actions in the form of home-movie style videos, which are played out entirely by actors. The fact that the thing that feels the most authentic and real is the least truthful part about the movie is delightful and perfectly mirrors the way the contradicting stories–that can’t possibly all be true–paint the most honest picture.

Lastly, though the crux of the movie was about what it means to be true, the subtext doesn’t need to be made text to get the point across. A character even asks Polley herself: “What do you think the movie is about?” The audience doesn’t need to be told in words that everyone will have a different take on an event in the midst of hearing everyone’s different take on that event. There’s so much fantastic showing in this film that it feels particularly redundant and a bit clunky when people tell. That part aside, the marvelous structure and captivating story are more than enough reason to see it.